Deprecated: Function get_magic_quotes_gpc() is deprecated in /home/customer/www/geomancy.org/public_html/plugins/system/jhackguard/jhackguard.php on line 139
 Mid-Atlantic Geomancy - Orienting from the Centre

Orienting from the Centre

Orienting From The Centre
by Michael S. Schneider

One indication of the transition of a people from nomadic wandering to a settled society is the founding of a permanent temple. Another is a switch in interest from the number seven to the number twelve, from lunar to solar calendrics, the 7-note diatonic panpipe to the 12-note chromatic scale, and other symbolic activities which informed every aspect of the culture. But actually founding the temple, city or civilization traditionally began by locating the point on the ground of its sacred center. This was done by trained individuals including the original Chinese feng shui and hing fa masters, the Roman augur (who inaugurated the process), and those trained for this specific task in India, Southeast Asia, Africa, Europe, the Americas and elsewhere around the ancient globe. Modern geomancy relies, in part, on some of the ancient sciences required for this task, including dowsing, astronomy, surveying, geometry and geology.

After locating the sacred center, the Earth energies which naturally wander through this point are fixed in place to serve as a reliable fountain of fertile energy above which the central temple's inner shrine is built. Just as meridian currents of the body are encouraged to flow with strength in their proper course by upright acupuncture needles, the naturally wandering earth energies were guided by standing stones and other structures, and incorporated into an organized, symbolic landscape in which their mythological tales took place. These earth currents were known in China as the "dragon current", or lung-mei, and exist in two forms: the yin, or negative, current represented by the white tiger, and the yang, or positive, current, represented by the blue dragon.

Worldwide mythologies of the dragon-slayers Horus, Cadmus, St. George, St. Michael, St. Catherine and others include the founding of societies by the spearing and fixing of an "earth born snake" who usually guards sacred springs, wells and rivers. For example, the crocodile was the totem of pre-Christan Copts, and a famous Egyptian carving depicts an equestrian Horus lancing a crocodile, his adversary uncle, known as Set or Typhon

The mythology of the founding of Thebes by Cadmus tells of his lancing the serpent and sowing its twelve teeth which become warriors which spill blood to fertilize the land and grow into the family/tribes which populate the society.

Later, the similar mythology of St. George spearing the dragon continues the tradition.

The fixing of the wild dragon current is symbolized by the placing of a "gnomon", an upright shadow stick or sundial into the earth at the sacred center. Sometimes the spear or stick is slanted towards the North Star and is called a "style", its angle revealing the angle of the site's latitude upon the Earth. The shadow stick is often described as a world-axis, the cosmic pole symbolically stretching between Heaven and Earth, around which the twelve-tribe society, or "amphictyony", turns, as the zodiac surrounds the sun. It is this cosmic pillar which properly orients the temple, and the society, outward from its sacred center to the sun, moon, planets, stars and entire cosmic order.

From simple poles to Egyptian obelisks, the gnomon is a deceptively simple device positioned at the interface of time and space. It "squares the circle", marrying astronomical cycles of time, marked by the moving shadow of the sun, with the square of space, the four cardinal directions and solstice-equinox "corners" of Earth. Thus, it was ultimately the proper marriage of Heaven with Earth which transformed chaos to cosmos and served to synchronize society and its organs with the Divine Architect's ideal construction. 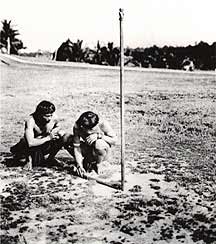 Two Borneo tribesmen measure the sun's shadow at summer solstice,
the longest day of the year, producing the shortest shadow.

As the sun rises and sets at shifting points on the horizon, the vertical gnomon casts its shadow in different directions on different days of the year, while the length of shadow also varies from day to day through the year. When the stick is slanted towards the Polestar, the direction of its shadow will remain identical at identical times of the day regardless of the day of year, and only the shadow's length will vary. The path of the shadow's tip was carefully traced to glimpse the beautiful order of the world.

This center was the starting point of a geometric plan of society which was delineated architecturally on the ground, the world's largest drafting table. A famous instance involves the founding of Rome by Romulus, who, following ancient ritual, selected the site, purified himself, dug a pit (Latin: mundus "the ordered world", equivalent to the Greek kosmos,) and built a fire altar above it. Then, with white and black bulls, he chanted as he ploughed a circular furrow around the Palatine Hill. The earth broken by the plough was directed inward so that no portion of the sacred earth fell outside the enclosure. He lifted and carried the plough over what would be the gates or portals (portare, to carry — “portable”) and that's why a door is called a portal, because in the sacred ceremony the plough was portable and carried over that gap. It was strictly forbidden to cross a sacred ploughed line, which his twin brother Remus did. And it was because of this impious act by his brother that Romulus slayed Remus and founded Rome alone. Related Latin words which reveal this relationship between ploughing and society include Urbs (city), Orbis (round), Urvum (plough), Urvo (“I plough around”). Of course, the Big Dipper is still known many places as "the plough" constellation circling the North Star in the great cosmic amphictyony.

The construction plan of the temple was done not with large divider compasses but with a loop of string, cord or rope with twelve equally spaced knots, or markers thrust into the weave. This is the method of the "rope stretchers" (Greek harpedonaptae, and Hindu sama-sutra-niranchaka) described in literature and depicted in art. The benefit of a twelve-knotted loop is that it easily produces circles as well as the indispensible three-four-five sided right-triangle, in addition to regular polygons including three-by-three square, equilateral triangle of side four, regular hexagon of side two, and in combinations form other useful shapes including regular pentagons and decagons, without having to actually know how to "do" the construction with traditional tools. And it only takes a loop with thirteen equally-spaced knots to construct the elusive 7-sided heptagon (see Keith Critchlow's "Time Stands Still: New Light On Megalithic Science" or "A Beginner's Guide To Constructing The Universe" chapter 7).

In my workshops, participants learn these knotted-rope geometry techniques for the timeless, worldwide traditional constructions which orient structures to the solstices and equinoxes, along with an understanding of the geometric language which develops the theme of each creation. Here are the steps for the quadrature of the horizon around a center. It is the traditional temple-foundation construction which orients a site in time and space, described in texts like the Hindu Shulba-Shastras and evidenced since prehistory on every continent since time immemorial in mandalas, monastaries and other sacred arts, crafts and architecture. It is so simple that we need not construct any polygons, but merely need to turn circles which you may wish to replicate with a compass or length of string, or outdoors in a field with rope.

Around the shadow stick, turn a circle whose radius is twice the stick's length (reduced here).
Observe where the stick's shadow crosses the circle at sunrise and at sunset, and mark those points.
Connect the two points with a straight line. This line points directly East-West

Draw (construct) a diameter through the circle's center parallel to the East-West line
Open a compass (or stretch your rope between two stakes) to span the circle's diameter.

Reverse the compass and turn another circle around the diameter's Western end point. This is the construction of the Hindu mandorla ("almond") and Western "vesica piscis" ("fish bladder"), the birth canal through which the geometric cosmos emerges.

Use a straightedge, or stretch a rope, to create a line between the points where the two circles intersect to indicate geographic North-South.

Connect the four points made by the innermost crossings of the circles to reveal a square. This interplay of circle and square orients or weaves the site outward from the symbolic center of the universe into the cycles of time and the spread of space.

The square and its diagonals indicate the general direction of eight significant locations on the sacred horizon where the rising and setting of the sun and moon at Solstices and Equinoxes will occur. (Finding solar azimuths this way only works in a small window of latitudes -ed.) This diagram is the traditional quadrature or "crossed-circle" of the year, the crystallization of space and time upon which the both the towns, calendars and guiding philosophies of many cultures are structured.

More accurate observations made over time from the site refine the directions of risings and settings of the sun and moon at different latitudes, here adjusted for Latitude 40 degrees North. Due to the moon's Saros and other rhythmic cycles, observations over long periods of time will reveal the moon's eclipse pattern, and it's subtle, wobbling, varying extremes on the horizon. It was in this way, by marrying circle and square around the sacred center, that ancient peoples began the oriententation of their society with a vision of their integration into a sacred landscape within the great harmony evidenced in the handiwork of the Great Architect.