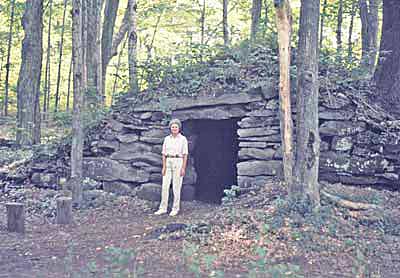 Calendar II in central Vermont is perhaps the most famous of the Vermont chambers. Standing to the left of the mouth of Calendar II is Betty Sincerbeaux, perhaps more than anyone else, was responsible for waking the rest of us see the reality of this lithic culture in Vermont. Photo by Byron Dix. 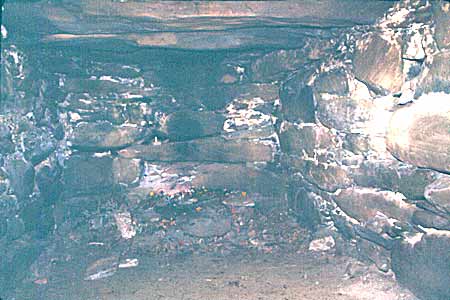 The interior of the chamber. This is the biggest chamber in Vermont, and perhaps in all of New England, measuring ten feet by twenty feet (approximately three meters by six meters). This ratio of 20:10 / 2:1 is found in the King's chamber of the Great Pyramid. There are seven massive lintel stones that span this width. Notice the flue hole/opening in the ceiling at the back of the chamber. See the candle in the back? This is evidence of its use as a ceremonial centre. 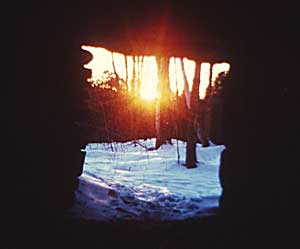 Winter Solstice Sunrise as seen from the back of the chamber of Calendar II. Notice that the sun is rising through a notch in the hills. Many chambers in New England are oriented towards significant horizonal astronomical events. Sacred sites do not have the same degree of spiritual energy throughout the year. One of the best indicators of when a site is at its "hottest" is when the major axis aligns to a significant horizonal astronomical (in this case Solar) event. Photo by Byron Dix. 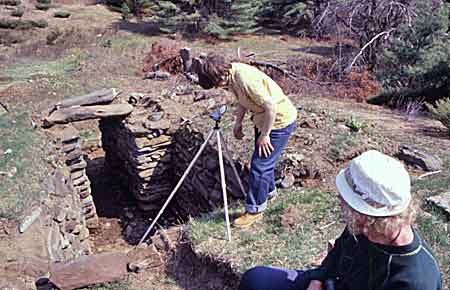 The ASD /NEARA Earth Energies Group measured forty different chambers in Vermont in the early nineteen-eighties. Here several of the members are working on Calendar 1 during the time of the excavation. They looked for three things: 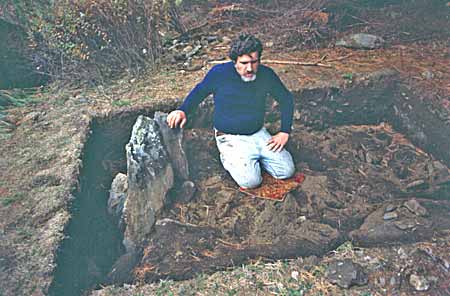 Archaeoastronomer Byron Dix at a stone he found central to the astronomy at Calendar I. Here he is demonstrating how he was kneeling when something like an enormous shock had literally thrown him off the stone!

It is standing with one's foot wedged against this stone that the Winter Solstice Sunrise can be seen (see next image). 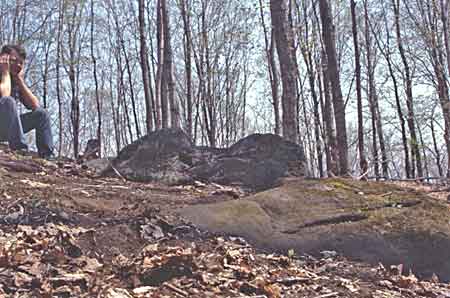 A North/South ridge rises sharply to the East of Calendar 1. The angle of elevation to the horizon is significant; therefore, the Sun rises much further to the South than it would be with a level horizon. The Equinox Sunrise as seen from the Calendar 1 chamber occurs in a saddle in that ridge.

This stone is at the top of the southern end of that north-south ridge. When standing at that central stone, the first gleam of the rising Summer Solstice Sun can be seen through this notch!