Why did our foremothers and forefathers know so much about astronomy? First of all, unlike ourselves, they lived in it. Anyone who has lived outdoors for a while begins to develop a different relationship with nature and the sky. Living in houses and especially in cities, where the ambient light and the tall buildings block out the heavens, we have forgotten the natural flow of the cosmos. Outdoors, if you get up at first light and go to bed when it gets dark, you notice the Sun as it rises and sets each day. In the Northern hemisphere, over the months you see the Sunrise moving along the Eastern horizon from the North-East at Summer Solstice (the longest day of the year), to the South-East at the Winter Solstice. Likewise, at Sunset, you would see the Sunset also moves along the Western horizon over the year as well. 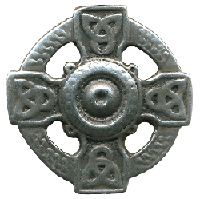 This is a copy of a Druidic Cross that was given to me by the Welsh Druid Ray Kerley when I lived in Glastonbury, England in the mid-eighties. It was Ray's family's druidic Cross.

From an astronomical point of view, the four arms represent:

The four Quarter Days of the yearly cycle

But the Celts (pronounced "Kelts"), the people of Iron Age Northern Europe were interested in the days half way between these Quarter Days. These Cross-Quarter Days were the major feast days of the Celts. They are represented by the four black balls at the points where the two arms Cross on the Cross shown above.

In looking at orientations, in addition to those of the Quarter Days, some sacred sites on both sides of the Big Pond are oriented towards these Cross-Quarter Days. Here's an example from Northern Vermont, USA. The picture was taken inside an underground stone chamber. 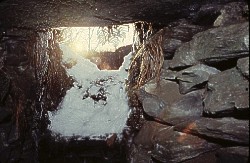 Cross Quarter Day - Imbolc - Sunset Rodwin Chamber, Northern Vermont, USA.
Notice the notch in the horizon that the Sun is moving towards..