No matter how you look at it…

...from far or near this natural hill (that's what "Tor" means) in Glastonbury, Somerset, England is magic.


But there are other things about this magical hill that have attracted attention.

Some see a labyrinth here.

And the Tor on the Millennium Eve 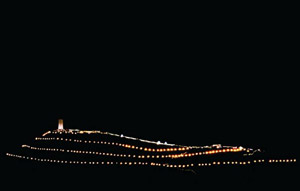 Over seven hundred flares light up the Glastonbury Tor on December 31st, 1999.

They were placed on the terracing, and clearly demonstrate its spiral or labyrinthine nature 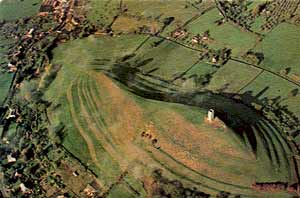 Some say there be labyrinths on this hill!

In the nineteen-sixties, Geoffrey Russel first postulated that there was a three-dimensional classical seven circuit labyrinth superimposed on the Glastonbury Tor. Since then, others like Geoffrey Ashe and Kathy Jones have written books about this labyrinth. To this day, archaeologists claim that it isn't there. To this day, those who have walked it gnow differently.

The mouth of the labyrinth is to the southwest. If you come up the trail that begins near the Chalice Well and the White Spring, it begins at the two stones above the first bench in the Tor field proper. With terrestrial features like this, one moves in to the realms of Hermann Rorschach's inkblot tests. What you see is what is there. This is uniquely the reality of those on the spiritual path - and of the Glastonbury Tor Labyrinth.

There are different visions about how this three dimensional labyrinth. Some show the labyrinth more clearly, others are more faithful to the actual topography, all are beautiful. Here is Jeff Saward's vision:

Here is a three dimensional representation of the labyrinth drawn by Kathy Jones. It comes from her latest book, in The Nature of Avalon: Goddess Pilgrimages in Glastonbury's Sacred Landscape. There is an entire chapter entitled "Ariadne's Tor Labyrinth Pilgrimage" dedicated to describing the path one takes when walking this amazing three-dimensional labyrinth.

On the left is a classical seven circuit - the path is in dotted lines. In the center is an oblique view of the Glastonbury Tor Labyrinth - the path is a solid line.
Drawings by Kathy Jones)

The Meander Pattern, or Greek Key, goes back way into our prehistoric past. Marija Gimbutas found this meander pattern on the figurine on the left in the Ukraine dated at 15,000 to 18,000 BCE!

The labyrinth has ancient roots. I was struck by the similarity of these two:

(No actual connection implied)
Sure! ;-) 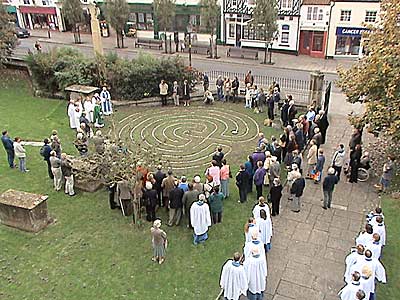 Dedication of the Glastonbury Tercentennial Labyrinth
in St John's Churchyard

Built to celebrate the three-hundredth year since Queen Ann gave Glastonbury our Town Charter in 1705,and to commemorate four important Saints on our town's history: Mary, Bridget, Dunstan and Joseph of Arimathea. This labyrinth is open to the public, and can be found on the High Street in front of the Church.

I want to thank Kathy Jones for permission to use her drawing of the Tor Labyrinth. Please check out Kathy's web site, The Goddess in Glastonbury