A labyrinth is a right brain intuitional tool.
The maze is a left-brain analytical puzzle. 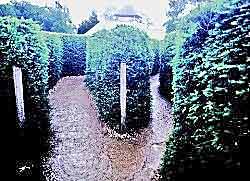 The main point about a maze is that there's choice. All along the way, there's choice.
The only choice a labyrinth gives you is if you want to go in or not. 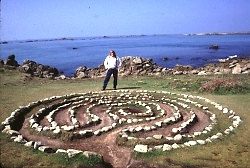 Out on the Scilly Islands off the SouthWest coast of Cornwall in England, there is the island of St. Agnes, where a well known labyrinth is found. As you can see in the photo of Sig to the left, it had fallen into a maze. You can see that it had been a classical seven circuit labyrinth, but because the walls had been kicked out of line, both the outer rings and the goal area had fallen into disrepair. 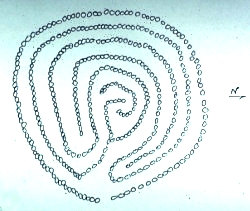 Since this photo was taken, the land owner asked several reputable dowsers to dowse how it had originally been, and to repair it. The St Agnes classical seven circuit labyrinth is now back in its original condition, and is no longer a maze, but once again, a labyrinth. 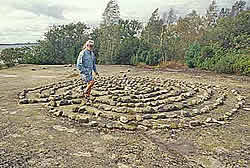 Note in the labyrinth above, on a small barren island in the Stockholm Archipelago, how easily the stones can be kicked out of place. 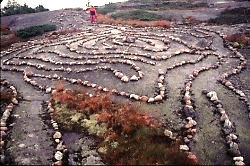 A clear example of a labyrinth to maze transition occurred out on Norsten, also in the Stockholm Archipelago, where at the turn of this century, there had been fishing camps with men who used labyrinths daily before going fishing. Now, the seed pattern and plan are forgotten, the walls fall apart, and mazes like this are the result.