As one ascends up the series, any number in the series, when divided into the next one up, gets closer and closer to (but never hits exactly) 1.618, phi, the Golden Section.

The formula that shows this is:

Phi and the Square Root of Five: 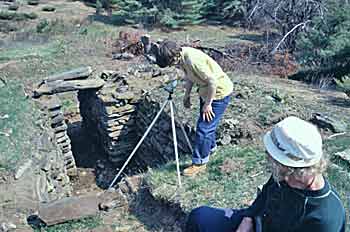 Calendar I was measured very carefully by the NEARA/ASD Earth Mysteries Group in the early 80's. Three measurements of the length were taken and averaged. The same was done with the width. Upon dividing the length by the width, the resultant ratio was 1.619 to 1. Phi (Ø) = 1.618 to 1. One of the realities when working with irrational numbers like pi, all the square roots, and phi is that, because they go on for ever (∞), no calculations are  exact as with rational numbers.

There is also a solid astronomical alignment to the Equinox Sunrise for this chamber as well. 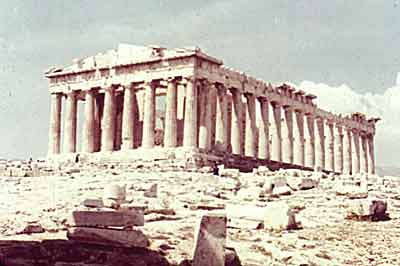 Designed by Phidias, the Parthenon is the Queen of Greek Temples, and personifies their interest in Sacred Geometry. If the height of the Parthenon is 1, its width is phi (Ø) 1.618, and its length is 2.236 (√5). You can see this relationship more clearly at the bottom of the preceding page.